In 1997/8 I followed the lives of 17 subjects ‘plugged in’ to the 5-6 Degrees Aquarius ‘hot spot’ where those two dynamic planets last met – in February 1997. Their turbulent tales from the left field appear in “Jupiter Meets Uranus” published (eventually!) in April 2009.

By the time I had completed that project, my friends, family and students were so fed up with my Jupiter/Uranus obsession that they began crossing to the other side of the road when they saw me approaching(I exaggerate, but only slightly!)

However, so compelling has been the interest in the 2010/11 Jupiter Uranus conjunctions in Aries and Pisces across the Web, and so persistent my emailers, commenters and volunteers, that here I am, at it again. Am I mad or what??!!

Of the many volunteers, I have had to restrict my group to 12. It would not have been realistically possible to take on more, given the demands on my time and restrictions imposed by eyesight problems which I hope will not get much worse over the coming months.

(For those of you Virgoan types who are interested in more detail re how the project is set up and structured, I have created a special page in which I have posted some of the ‘boring but necessary background stuff’. Click HERE if you want to check that out. NOTE: I am allowing a wide orbital range of 22 Pisces to 5 Aries. This is five degrees applying to the 27 Pisces – 0 Aries ‘hot spot’ where the conjunctions take place – and five degrees separating.)

But now, on to the first of those Tales from the Wild Ride, which will now unfold on a regular basis until next Spring 2011. A great big ‘thank you’ to those volunteers prepared to share their unfolding stories with the rest of us. Apart from some minor editing, you are reading their own words.Through them, you will be able to observe the transformational impact of the turbulent unpredictability of Jupiter/Uranus, held in a matrix of darkness, delay and difficulty brought by Saturn/Pluto – so obvious ‘across the map’ of the spring-autumn period of 2010 in our individual and collective lives….

Did you experience anything significant of an inner/outer nature during this period? (Bear in mind that any planetary energy can strike a ‘dumb note’ with you, but be vividly observable in the life/lives of family or and/or friends and/or significant others)

(Please indicate which of the following 4 categories applies)

In a nutshell, everything broke.  My laptop (which I depend on for my livelihood) had to be repaired not once, but twice, and spent the whole period in the shop (Uranus rules my sixth).  My fridge broke down.  The wiring in my house kept shorting things.  Lots of frustrations with things electronic.

I have a Moon/Uranus conjunction in the 11th—my best friend had a major rift with her son (still not mended), and my mother had one with another family member…..

Sometime around Easter, suddenly fell out of love with someone I’d been in love with for more than three years…..

Intellectually, creatively and intuitively, this period was very intense and rewarding for my astrological work.  I broke a lot of new ground in these months—particularly in researching psycho-sexual development and relating it to the asteroids…..

There has been a major breakthrough, for me, in understanding the way sexuality develops and the ways it can manifest differently in different people.  I’ve come to the conclusion that we’re still in the dark ages about understanding sexual orientation.  I relate this to the (Ed. Jupiter/Uranus) energy falling in my 7th house and to the general Aries/Libra stimulation….. I’m looking forward to where this is going to take my work.

Yes. From March onwards, escalating across April and May I experienced one of the most difficult and stressful periods in my life….

The problems of this time came down to the fact I’ve been pioneering a radically new concept and while it’s been gaining a great deal of support and significant progress has been made, the first six months of this year and in particular March, April and May, were periods of great difficulty and set backs.

My experience of this period was one of extreme contrast – finding that on the one hand extremely powerful people and organisations were lining up by my side to support my project, but on the other hand traditional societal and economic models were working against my endeavors and at times making it feel as if I’d set my heart on an impossible task.

……I felt acutely aware of the fact that two opposing sides were in a showdown, both holding their ground, the innovators raising the bar and pushing harder than ever to bring new ideas and approaches to the fore, as the traditionalists pushed against them, being as obstructive as possible.
During this period I was very much aware that I was not the only person feeling frustrated and at times angered at the scenarios unfolding around the world. Many friends and colleagues were feeling similar emotions and feeling at the end of their tether; sick and tired of the status quo and feeling like something has got to give.

The period was mainly one where I worked exceedingly hard behind the scenes, maneuvering around a multitude of obstacles that relentlessly presented themselves, finding plans got delayed and just about everything that could go wrong did go wrong.

However, ……the delays caused by the obstacles during March, and to an even greater extent April, which came to a climax in May, have led to better opportunities in the long run. New opportunities started to present themselves during April and May, some from external sources, others because I tried some new ways of doing things…….  I think I came out of that period stronger and braver than when I entered it. 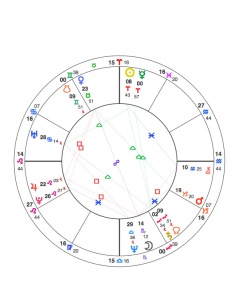 Long Easter week-end in Barcelona. Because of lack of resources have not been able to travel since 2000. First time for 15 years to travel to a new place. Like coming home. Blown away by Gaudí. The trip resulted in many well-received articles for my blog.

The friend I travelled with had never been abroad in her life (63 years of age). Two weeks after Barcelona she won a free trip to Florence, Italy in October. Also suddenly she has had a lot of contacts with foreigners which in her everyday environment is not normal.

Sudden death of a dear friend, my family doctor from Cyprus (16 April).

An out-of-the-blue phone call from my Cypriot male friend on May 28th. His Sun/Moon is on 29°53’ Pisces. We met May 1988 (I was living on Cyprus then), had no contact 1993 – 2005 (I moved back to Finland in March 2000). He got in touch via common friends in 2005, we met briefly in January 2007, had a long week-end in Berlin March 2009 and have been in touch ever since. He was my travelling-companion on the Greek odyssey I just returned from. An extremely challenging relationship but difficult if not impossible to put a lid on.

Much of what I experienced in May (April was fairly quiet, I believe) —  beginning May 10th, in fact — was done so through my partner, someone with a 7 Libra Sun.

An opportunity to work — and subsequently live — overseas, one that had been bubbling on a back burner since late-October (when Saturn was Direct and first moved into opposition with my Sun and was conjunct my natal Jupiter/Uranus), suddenly picked up a great deal of steam.  We once again found ourselves seriously considering the probability of making this move and how it would change our lives, etc and so on.

In a way, with Uranus ruling my 7th House, this kind of makes sense.  This Uranus/Jupiter conjunction in opposition to my natal Jupiter/Uranus and conjunct my Sun/North Node could certainly manifest in the lives of those I share my life with.

I also learned that a dear friend of mine, another Libra who has this Uranus/Jupiter conjunction on her Ascendant, landed a sizeable role in a big Hollywood movie in LA at the same time she learned her Mother might possibly need bypass surgery in NYC (Pluto is moving over her Midheaven and through her 10th House).

Like I said, most of the events I’m witnessing are happening to those I consider partners or close friends.

Themes of family and home predominated my thoughts and feelings. April I returned to live and work in the US after 10 years living abroad. I am without a home, job, or money. I am new born, vulnerable and exposed, temporarily living with friends who are as close as family.

I felt disoriented in my new, unfamiliar environment. I had trouble connecting with the community and spent most of this time at home on my own. Feeling like a fish out of water.

To read the whole “Tales from the Wild Ride” series now unfolding from August 2010 to March 2011,  click HERE:

All comments/shared experiences most welcome! If you have enjoyed this first of the Tales from the Wild Ride, it would be great if you could send the link around your networks, so that as many people as possible can follow the series and see ‘astrology in action’!