5. The Jupiter/Uranus volunteers sum up: “Louis”, “Fiona” and “Barbara” 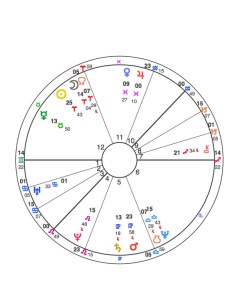 In retrospect, regardless of what I said in previous questionnaires, the significant features for me were probably new learning, meeting new but not necessarily easy people and travelling a lot to Europe.  Yes there was an increased feeling of unease, connections with much younger people facing death through illnesses out of the blue and a sense of having little time left to do an awful lot.

I think the response to the previous question suggests that the effect was able to be seen and felt.  It hasn’t been very enjoyable as even the new learning has had an obsessive and even desperate quality to it.

It all seems so petty and personal in the light of the current situation in Japan, but I learned to not listen to every body who wishes my attention.   I still am eager to listen to my daughter, to my best friend but my indiscriminate listening to just anyone has disappeared in this year.  My twenty years of dogged devoted listening from my training as a homeopath has flown the coop.  I just don’t have the patience any more to mother everyone….I feel both guilty and relieved.

Readers new to this year-long project following the changeful lives of our dedicated band of ten researchees should click HERE to access the whole Archive, set out chronologically.

Follow the Spring 2011 summing-up of the whole project below:

4. The Jupiter/Uranus volunteers sum up: “Eve”, “Kathy” and “Caroline”

5. The Jupiter/Uranus volunteers sum up: “Louis”, “Fiona” and “Barbara”

6. The Jupiter/Uranus volunteers sum up the World at Large: Part One

7. The Jupiter/Uranus volunteers sum up the World at Large: Part Two