Jupiter meets Uranus – next up: “Tales from the Wild Ride” Part 12

Q: Did you experience anything significant of an inner/outer nature  which was ‘out of the ordinary run of life’ during this time? (Bear in mind that any planetary energy can strike a ‘dumb note’ with you, but be vividly observable in the life/lives of family or and/or friends and/or significant others)

B)  Summary of the most significant facets of this time:

(Can you relate the astrological significators I have set out to what your diaries tell you? eg to particularly important events/occurrences/shifts of understanding or perception which cast things in a new light, etc. If you can’t be that specific, do not worry! Just provide what seems relevant to you ) 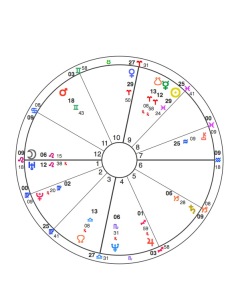 I was off from work until Oct. 6th 2010, recuperating from my tendonitis, bursitis and shoulder impingement.  Since the initial injury on August 18th, I have had continuously pain in my left shoulder.

My elderly Aunt’s mental health has stabilized since this summers realization that she has dementia. My cousin has moved in to live with her and she now has a companion full time.

We had more restructuring at the Post Office where I work and have worked for thirty years. There were more consolidation of jobs, bringing additional duties to everyone in the workplace.  On January 7th three days after the last conjunction, the new Postmaster General announced a reduction in force and a voluntary early retirement in the wake of billions of dollars in losses.

Could this Pluto/Saturn restructure cause me to gain an early retirement?  Or, will I be destined to have shoulder surgery and endure three more years, until I reach minimum retirement age of 55. Stay Tuned….

Jupiter rules my fourth house.  My entire household has been in upheaval due to the fall out from my father’s death in August.  My mother moved in with me, and there have been many adjustments and surprises along the way.  We are discussing moving away from this area, which I have mixed feelings about.

One of the things I have had to come to terms with during this period is that my life is very different now (compared to pre-transit)—I’m now successfully free-lancing full time, which causes adjustments of its own.  From the time Jupiter turned direct, I’ve had a slew of clients, almost too many to keep up with.  Jupiter is conjunct a 12th house Sun and Uranus is conjunct an 11th house Moon in my chart, and I feel very strongly that this transit has created a bridge between my past and my future—life makes sense now, suddenly, and for many years, it hasn’t.  The Jupiter/Uranus conjunction in Aries falls opposite my Mercury, which rules my 10th and my first house.  Both my sense of self and my professional life got the Jupiter/Uranus zap.  When Mercury entered Capricorn, it seemed as if, finally, all the pieces fell into place.

My niece, who was on the brink of death last summer when the transit was on her Mars, has undergone a radical personality change (for the better).  Seems as if she has embraced her life in a new way.

Everything so sweet and cuddly with Vertex (Ed: Kathy’s Ex) when Mercury entered Libra but then, Venus hit my Moon in 4th house to go retrograde on the Moon 8 Oct (and then to turn direct on my 4th house Neptune in the last degree of Libra 18 Nov), and the whole relationship changed shape. Now I think it’s over. Horrible 6 weeks. My lovely ex became an ex-ex.

11 October I received a letter from the tax man. They are asking me to pay € 7500 in back taxes. This is a complete mess. I really hated this Venus R in my 4th.

14 November, 2010: Major tooth problem (I blame Pluto hovering at the cusp of my Saturn ruled 6th house and digging up all kinds of stuff).

13 December, 2010: Took a knife in my hand and let the Freon out from the fridge. I was hoping for a red sports car to transform my daily life. Mars/Mercury/Pluto conjunction in 6th. I think this was really funny: the planets showed me their versatility.

17 December, 2010: A dear friend went into hospital after losing suddenly the sight of one eye.

24 December, 2010: More bad news about the health of my friend’s husband in Cyprus. He desperately needs a 3rd kidney transplant but he is too sick to go through the operation.
WHY IS EVERYBODY’S HEALTH AFFECTED IN SUCH A WAY?

5 January, 2011    My dream (I think this was very extraordinary indeed) the night after the Solar Eclipse and New Moon in 6th, and Jupiter/Uranus conjunction in 9th (27 Pisces):
We were at some airport: me, Vertex and some lady unknown to me but clearly known to him, probably his secretary I thought.  He was very boisterous, also flirting heavily with the other lady.  Then he approached me in a hasty way and gave me a plastic bag full of connectors/adaptors. After that he escaped from the sight.
I woke up and knew instantly what the dream was telling me: in November Vertex went to Istanbul (for real I mean) for a medical conference. In his mail he said “we” are going to Istanbul. I didn’t ask who “we” is because at that stage I had no interest whatsoever regarding his activities.  Now I know as surely as he told me himself that the “we” was the secretary Eleni and him and that they slept together during the trip.
I finally made the connection, thanks to Jupiter and Uranus activating (again) the Mercury at AP in 9th house – Uranus in 12th – Saturn in 5th triangle.
That’s it. The end.

Jupiter meets Uranus – yet again!“Tales from the Wild Ride” Part 13

NOTE: I will be sending out the Final Questionnaire in mid-March 2011, asking my ten researchees for their brief summary of Spring 2010 – 2011.

I will be asking them to evaluate the significance of the above year relative to other years in life ( in as much as one can!) and whether the Jupiter/Uranus effect  (which I will briefly re-define) was in their opinion able to be seen – or not.

For information on Anne’s definitive 2009 study of Jupiter/Uranus conjunctions, and her unique research into the impact of the 1997 conjunction on individual and collective life, click HERE

Anne Whitaker’s main blog is Writing from the Twelfth House, a lively and popular magazine-type site, set up in the summer of 2008   “….for those writers and readers – and fellow astrologers! – who share my preoccupation with questions of mystery, meaning, pattern and purpose….”

If you are looking for information, education, entertainment and inspiration,